Lately I’ve been reading up a bit more on functional programming. I feel that after years of knowing about the existence of the paradigm and even trying to dip my toes in a couple of times without success, now it finally “clicked”.

I’m still playing around with concepts and languages, and trying to look at some programming exercises in a more functional light. It was surprising to me, though, how easily and efficiently I was able to solve today’s LeetCode challenge . The problem was fairly simple - reshape an MxN matrix (presented as a list of lists) into another matrix that is RxC (an arbitrary number of rows and columns) while keeping the original matrix elements.

Here’s the solution in its entirety:

Interestingly, LeetCode allows us to return iterators where lists are expected, so we don’t have to litter everything with list or explicit comprehensions.

My first thought is that this is a bit terse, and it’s certainly less obvious than busting out the for-loops. I’m not convinced that’s necessarily a bad thing, though. Of course, overcomplicating things is bad and code should be as simple as it can be, but this is essentially a higher-level way of doing things

On the other side, we have the hints given by LeetCode on how to solve this. They actually made me chuckle thinking about how much more inelegant other solutions dealing with indexes must be (spoiler alert):

Do you know how 2d matrix is stored in 1d memory? Try to map 2-dimensions into one.

Try to use division and modulus to convert 1-d index into 2-d indices.

M[i] => M[i/n][n%i] Will it result in right mapping? Take some example and check this formula.

Those all look terrible. We didn’t have to deal with a single index in our iterator solution! 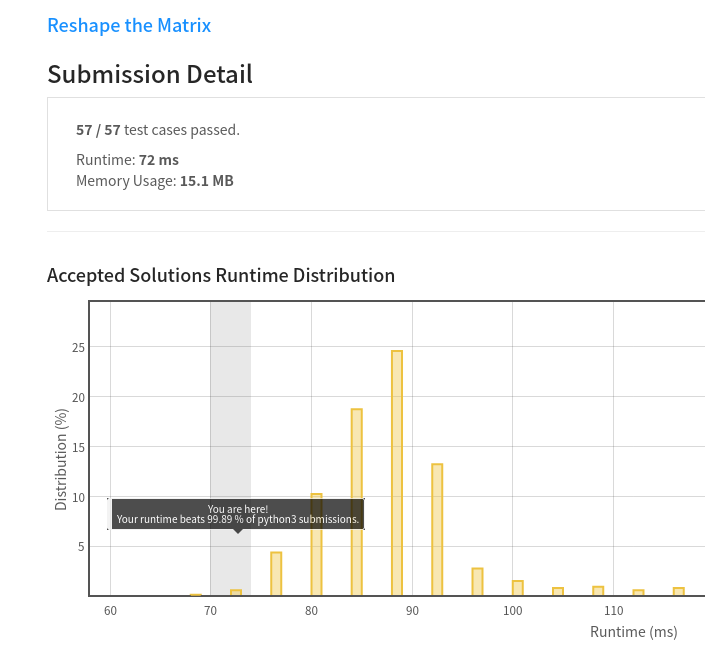 I actually thought that it could’ve been a bug with how LeetCode analyzes submissions - maybe it’d evaluate and measure the function execution time, and then check the results. In that case, we’d get a wrong assessment of the solution because the iterators we used are lazy, i.e. they’re only evaluated when needed (which would’ve been after profiling if the above were correct). But it seems that’s legit, actually. At the very least, iterators are consumed, as the absolute difference to other submissions wasn’t as massive as to imply there was no iteration whatsoever going on.

So there we go! An elegant, fast solution to an otherwise hairy problem in ( effectively) two lines of functional-style Python :)